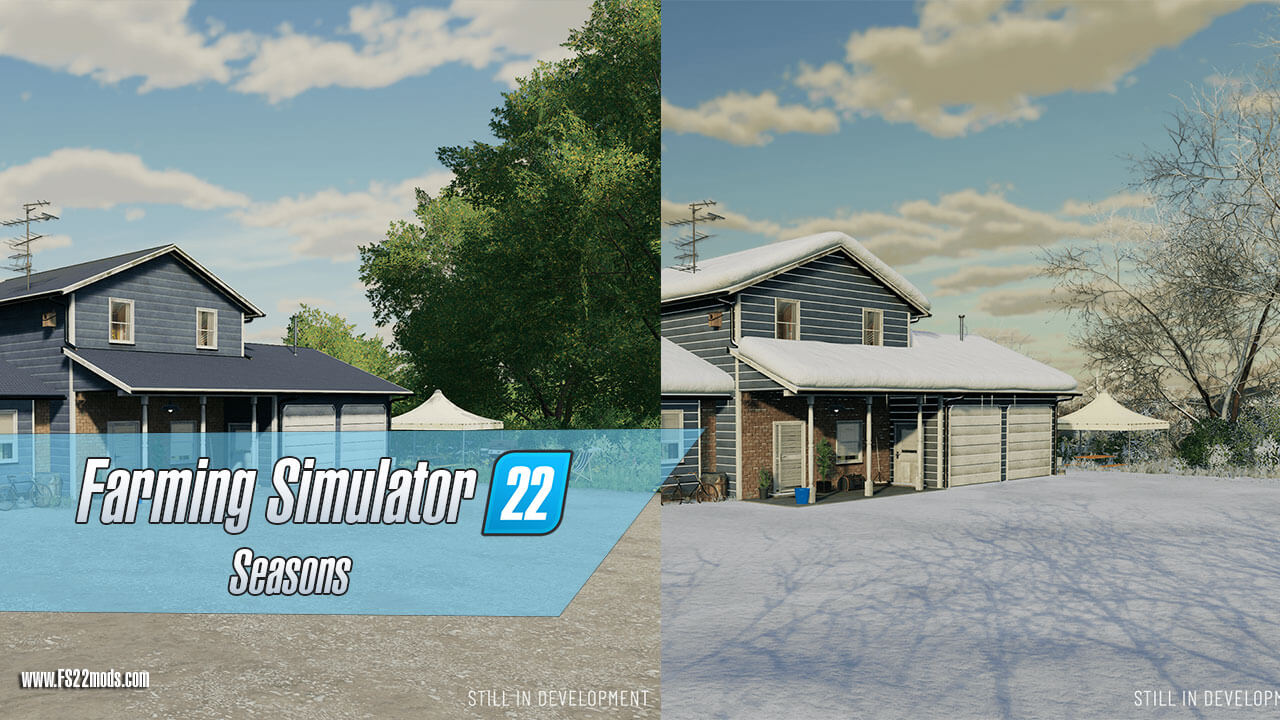 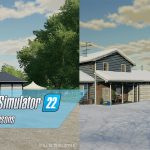 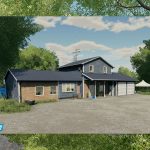 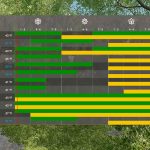 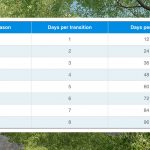 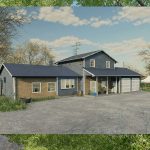 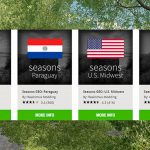 Seasons for Farming Simulator 22 are now available! It’s a great way to bring your FS22 game closer to real life. It’s super easy to install, too: the mod takes just a couple of minutes to download and install. For its excellent ease of use, and weather features, this is one of the top mods out there. Has been for years! Seasons was one of the most popular FS19 mods out there – in fact, it was the winner of the FS19 mod competition a good while back.

And so, we have full reasons to believe that Seasons 22 is going to be excellent as well. Let’s cover some of the main things and answer the pressing questions.

Seasons 22 is a mod, meant for Farming Simulator 22. It adds a variety of seasonal changes – and that’s an excellent way to add more realism to the game. Depending on the season, you’ll also need to adapt your work on the fields – that will add an extra challenge to the game, making it more interesting and rewarding in the progress. 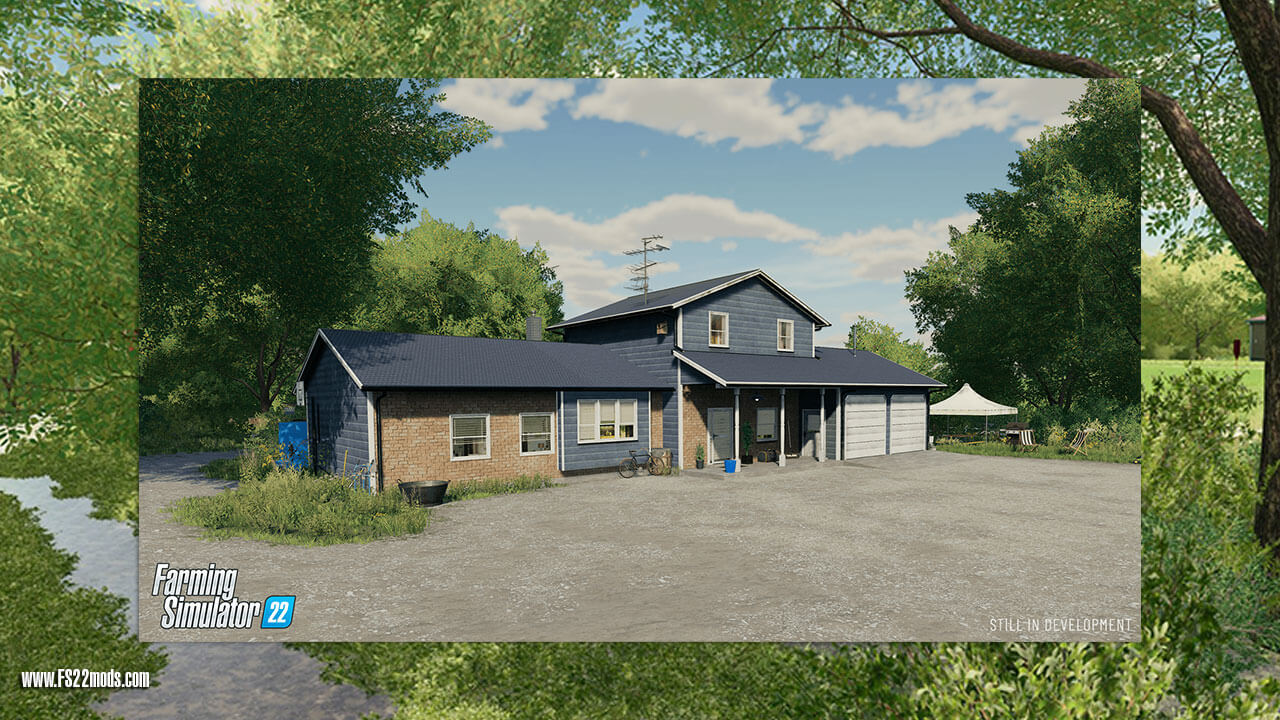 How do Seasons work?

The mod simply follows the natural cycle of a farmer’s year. Depending on what happens throughout the seasons: that means adjusting crop prices, different behavior of the domestic animals, as well as changing needs for vehicle maintenance. The weather greatly affects everything – and that’s what this mod does.

What is the cost of Seasons?

Seasons 22 mod is completely free of charge – you can download it from the official ModHub of the game.

Is Seasons available on PlayStation and Xbox?

Right now, the Seasons mod is available only on PC or Mac. However, it is very likely that the mod will make its way to consoles as well, as they’re known to be in close collaboration with the game’s creators.

Who makes the Seasons mod?

Seasons 22 mod is made by a group of five modders: Jos (Rahkiin), Per (mrbear), Per (reallogger), Stijn (Wopster), and Sebastian (theSeb). Collectively, they are known as Realismus Modding. They have a lot of years of experience under their belts: in fact, their Seasons mod for FS17 was voted as the best mod for the game.

Now, let’s have a deeper look into Seasons 22, and see some of the main things to consider before you try it out yourself:

The Seasons mod directly affects the game engine. And so, if some other mods are there that work with the game engine as well, there could be conflict that causes problems.

Before using Seasons 22 on your game, make sure to disable or remove any of the mods, that do any of these things:

Makes sense, right? After all, these are the 4 things that the Seasons mod really affects.

So, when none of the other mods that do this are present, you can go ahead.

You don’t have to remove the mods for that: alternatively, just set up a new mods folder.

To do that, right-click all the clashing mods that you have, and push F2. Then, you’ll be given an opportunity to change the folder name. You can call it “ModPause”, or you know, something else that sounds suitable.

It’s All About Transitions

The best way to play with the Seasons mode on, is to think in transitions. Each season will go through a transition for three times. In fact, you can see it yourself on the mod men HUB. To access it, just click Alt + S.

There, you’ll see it: four seasons, including three transitions each, for a total of 12. 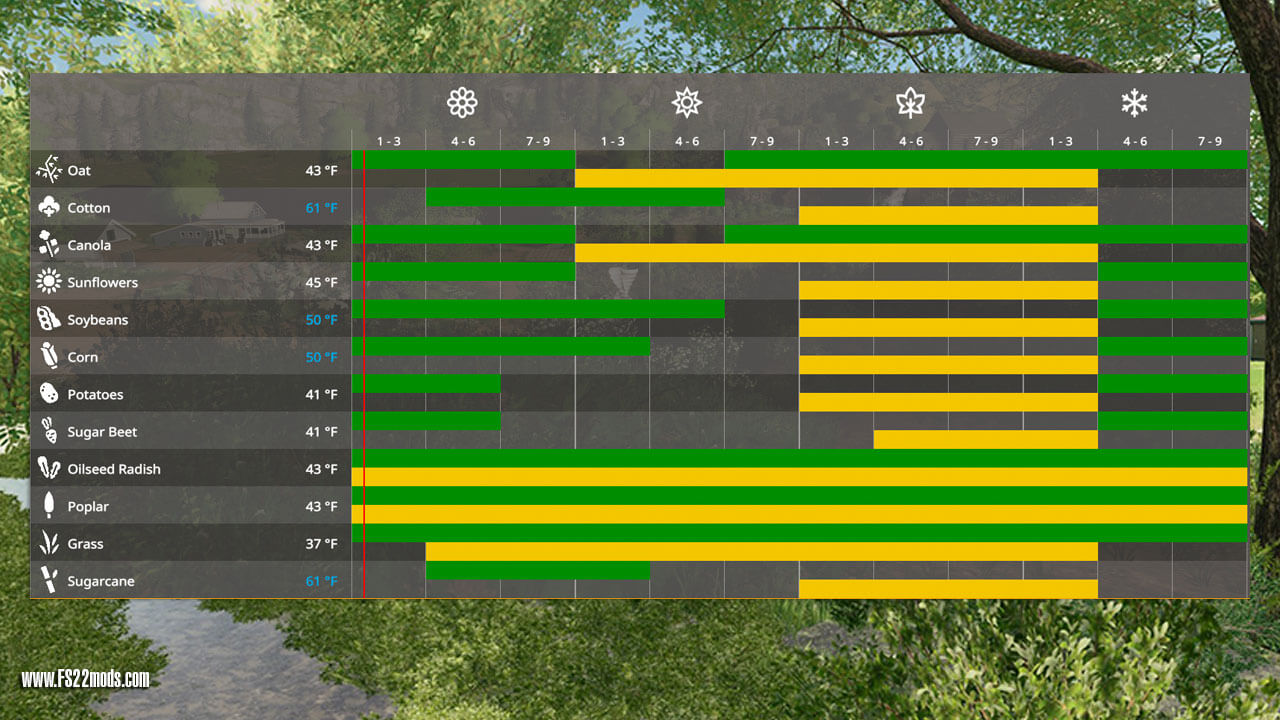 In this mod, you’re going to have four seasons, and that’s it (no fancy two-season weather for you here!). However, you can easily change just how long those seasons are going to be. For that, all you need to do is to open the Seasons menu (Alt + S). There, a season can be adjusted to last anywhere from 3 to 24 in-game days.

For example, if you wish for your season to last just 3 days, it means one transition per day. And so, one year is going to last only around 12 days.

And on the other side of the equation, a season can be 24 days at most, making one transition 8 days, therefore, making the in-game year last a total of 96 days.

Here is the helpful table to see how each season length affect the in-game year: 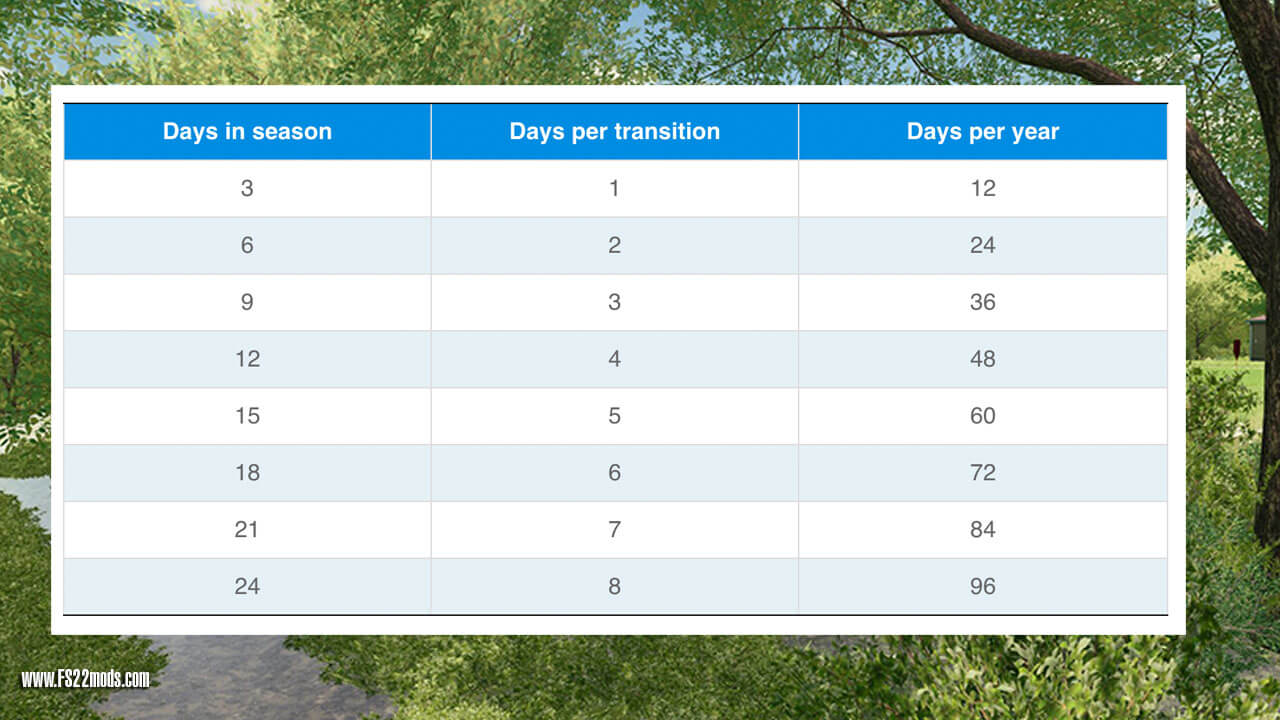 TIP: Check and adjust the season length immediately after starting a new save. When testing out the mod, we saw that the default season length was set to 6 days. You may want it longer or shorter, so adjust it before making any in-game decisions.

Starting a new game with Seasons

Seasons 22 begins each save at spring, and also fully resets each of the fields. And while the mod works on all maps – it becomes absolutely excellent only in a handful, which are fully optimized for fully diverse weather.

So, consider picking a map that includes good snow integration. If you’re using the weather mod, you want a mod that can make the best of it, right?

Here are the best maps for winter on the Seasons mod:

There is also an expanded list of maps that are supposed to work well with the Seasons mod as well. For that – click here. However, we haven’t tested all of these (unlike the ones listed earlier). So, enter at your own risk. 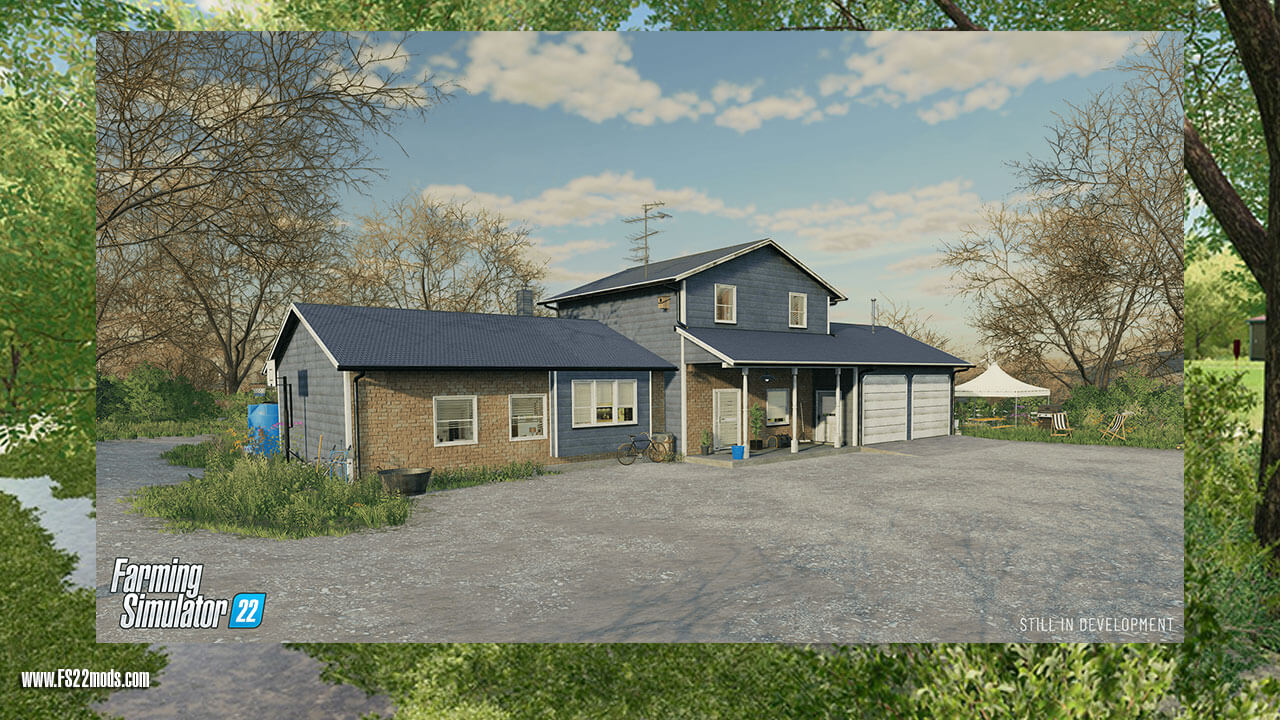 Changing of the Seasons

As you enter the new game, you get a breath of fresh spring air, and a sight of barren fields with no crops on them. Obviously, you will have to start the year with some basic upkeep, such as plowing, cultivating, sowing the seeds, and spraying the herbicides.

As seasons change, your main missions will change as well:

Winter: upkeep of the farm animals and machinery.

TIP: Winter is an excellent time for forestry work. Makes sense – in the Northern hemisphere, this is done in real life as well. You won’t have much else to do anyway, so have a go at it! 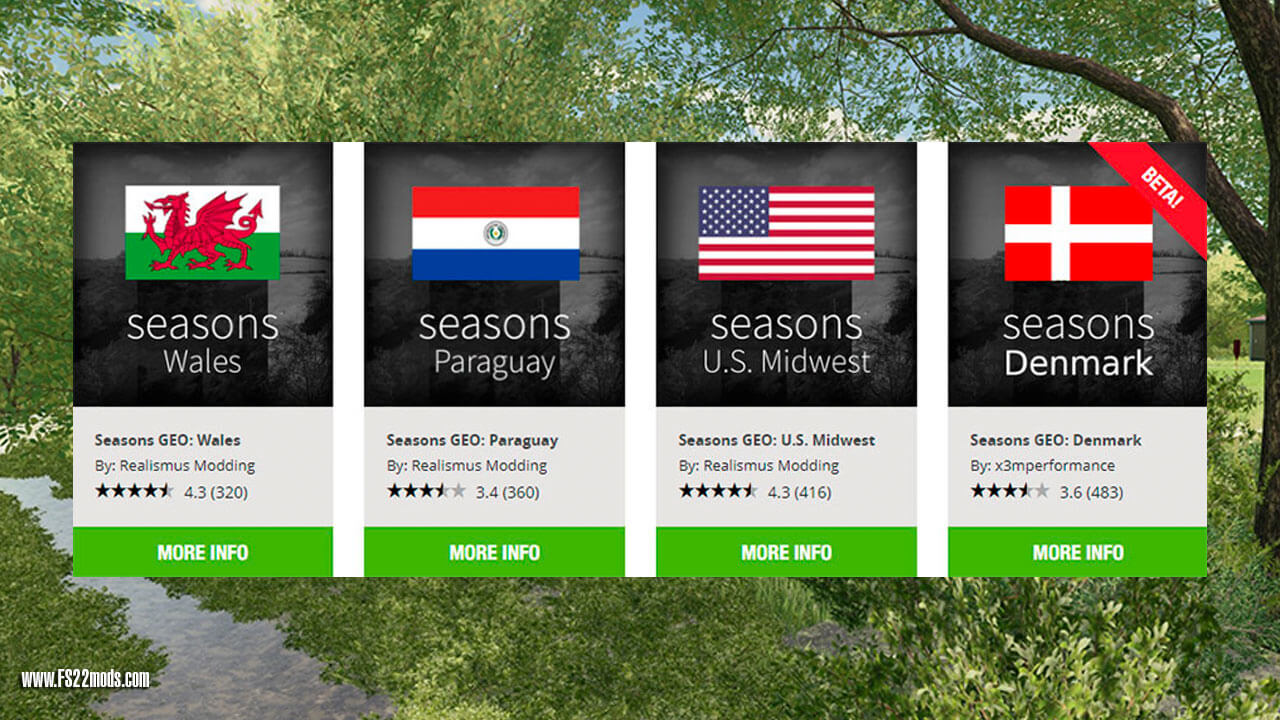 Now, we don’t need to tell you this: the weather isn’t the same everywhere. For example, depending on where you are, our depiction of what “April” is can be entirely different. And so, to solve that problem and to make the game just a little bit more realistic, Seasons mod creators have introduced the GEO mods.

GEO (shortened version of ‘Geographical’) mods adjust the weather to better replicate the conditions of a specific location. For example, on FS17, there were options for Wales, Paraguay, U.S. Midwest, and Denmark – four rather different locations. Also, the mods affect the length, and the severity of the effect the weather has on harvesting and crops.

With no GEO Mods, Season 22 on FS22 will replicate the weather of the Southern United Kingdom.

Ease off the Fast Forward

Fast Forward must be one of the most commonly clicked buttons on the game. However, Realismus Modding says that it would be wise not to overuse it. On single player, keep the limit at 6000x. On multiplayer, lower it down to 1200x. It’s better to be more in control and take your time here.

This right here was some of the basic stuff concerning Seasons 22 on Farming Simulator 22. So, now you’re more than ready to finally give this mod a shot and see for what it’s worth. And while you’re at it, you might want to check out some new helpful Seasons 22 guides.

Author:
We don't have any information about the author of this Farming Simulator 22: Seasons mod . If you are an author, please contact us or leave a comment below and we will add your credits for FS22 mods .
5/5 - (1 vote)